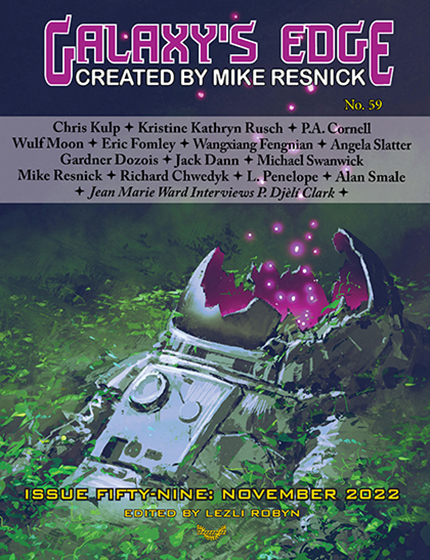 I am writing this on the seventh anniversary of accepting a job offer from Shahid Mahmud to become the Associate Publisher of Arc Manor. Since then, I have gone on to become the editor of this fine magazine and the developmental editor for many of our novels. As a team, we’ve developed The Mike Resnick Memorial Award, created two new imprints, started distribution into stores, and—along with the various website and cover design hats we wear—we’ve managed to grow our small press into a larger publishing company. I can’t thank Shahid enough for giving me one of the most rewarding careers of my life.

We were delighted to attend Bubonicon, Worldcon, and Dragon Con in recent months. In fact, Shahid flew straight from Worldcon (in Chicago, Illinois,) to Dragon Con (in Atlanta, Georgia,) for just one day in order to present The Mike Resnick Memorial Award to Chris Kulp, the 2022 winner for best science fiction story by a new author. In the same evening, another of our writers, Oghenechovwe Donald Ekpeki, didn’t win a Hugo Award for his novelette, “O2 Arena,” which we first published in Issue 53 of this magazine. It is a huge honor just to be nominated and I was so proud to be there at the event to cheer him on. Chovwe was able to get a last-minute visa approved by the US Consulate to travel to the States and attend Worldcon, and I had the pleasure of being just one of many in the writing community who helped him navigate his first in-person convention.

Along with Recommended Books by Richard Chwedyk, the next Longhand column by L. Penelope about calling a truce between plotters and pantsers, and a new Turning Points column by Alan Smale about the Antikythera Mechanism, Jean Marie Ward interviews the incredible, P. Djèlí Clark, whose fiction is currently taking the world by storm. Discussing history, magic and fabulous food, the interview is a feast for readers. (Finding out the origin of his name alone was so interesting to read!)

Also included in this issue of Galaxy’s Edge is the Award-winning short story “What Would You Pay for a Second Chance?” by Chris Kulp, about the life-changing decision Susan makes to extend her life after a terminal diagnosis. Agreeing to being transferred into a robot body on the condition she fights in the current war to “pay” for her new form, this thought-provoking tale leaves us asking the age-old questions: what is it that makes us human? Is survival worth risking your humanity?

Along similar themes of trying to overcome or cheat death, the incredibly moving “Past Due” short story by Eric Fomley tells of a man’s heartbreaking conversation with his father as they try to work out how to pay for overdue bills in a hauntingly realistic science fiction tale. And Wulf Moon’s “Sharnathium” explores what an astralmancer god would risk to experience corporeal pleasure just one more time. Despite a completely alien voice and transcendent setting, the protagonist of the story is so completely relatable, and the consequences of his actions transport us to a surreal conclusion that no one could have ever imagined possible.

The editor of the Chinese edition of our magazine, Yang Feng, introduces another translation in our short story exchange program, “Towards the Sky” by Wangxiang Fengnian, and we round out our original fiction with a seasonal gift for all of our readers: “Into the Frozen Wilds” by P.A. Cornell. You’ll all be rooting for the three elves using their dying magic as they trek across an extensive snow-deluged landscape to find the fabled Reindeer Unicorn in order to save Christmas.

Mike Resnick’s reprint piece in this issue is about an interstellar basketball coach recruiting the “next big thing” on a small, forgotten planet, only to find out his target might be more than just a player. And we are thrilled to reprint another collaboration by Gardner Dozois, Jack Dann, and Michael Swanwick, “Golden Apples of the Sun,” about a door-to-door computer salesman attempts to sell computers to fairykind who have no use for the technology.

Angela Slatter’s “The Undone and the Divine” can be perfectly introduced by the author’s own words: “When Delling, shaven-headed, in a faded blue travelling dress, crosses the burnt boundaries, steps over the earthy threshold still marked with deepest ash and visible under the grass and wild foliage after all the lonely years, the specters go about their business, pretending that she is the insubstantial one.” Can she make an an impact on lives no longer of material substance? Read Angela’s beautiful prose to find out.

And lastly, Kristine Kathryn Rusch returns to our pages as our featured serialization, with part one of The Reflection on Mount Vitaki. Professor Kyra Row Kirilli feels the pull of the mysterious reflection on the mountain that lies across the Forbidden Valley. It calls to her. But why? Even her husband, with his knowledge of magic, cannot provide an answer. Kyra must embark on a journey to the source herself—a journey no one ever survives.

While I finish this editorial, Autumn is falling around me in all the burnished shades of beautiful as we enter the festive season here in the United States. The ambience of the season is very reminiscent of the theme of renewal through death that infuses so many of the stories in this issue, and it inspired the artwork selection I made for the cover. One of my favorite holidays to celebrate in the US is Thanksgiving, and I am so thankful for our writers and readers who make this magazine possible.

Read, celebrate, and renew. And have a very Happy Holidays.

Paper subscription direct from the publisher

Notify us of your change of address (paper subscription)

Contact Weightless Books or Amazon for changes to your digital subscription. 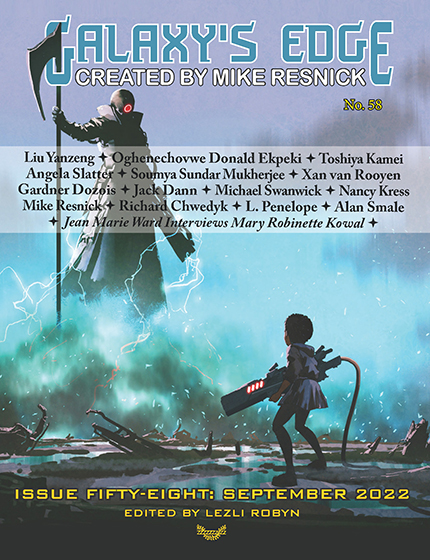 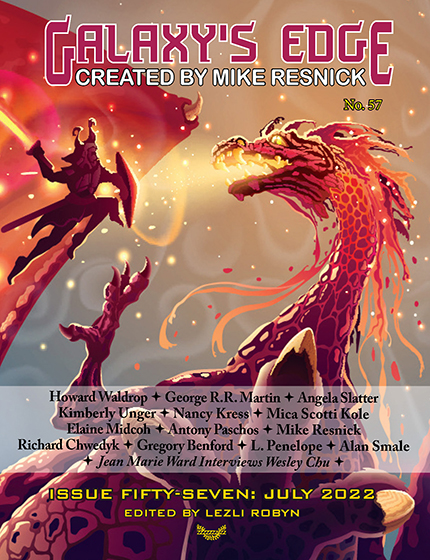 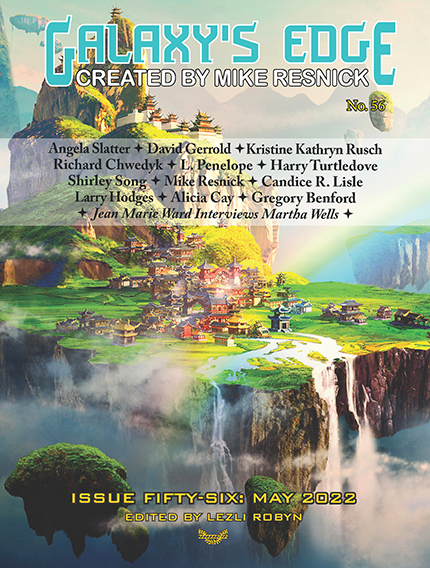 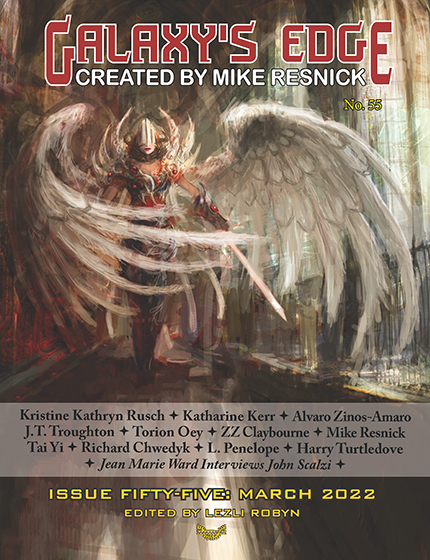